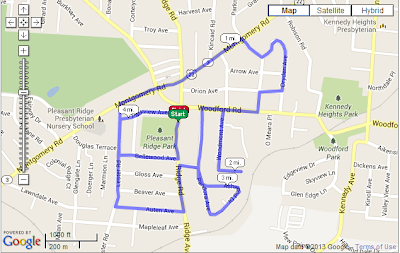 For our Pleasant Ridge run we were joined by Pat and Kim--our friends, who are talented runners and lovers of Cincinnati. Pat ran for Wilmington College before continuing his post-collegiate running career around town. Fittingly, Pat and I met one weekday morning when we were both getting some miles in on the Lunken trail.

Kim took up running after college and is currently in training for the Philadelphia Marathon. With these two joining us, I was a little concerned that our frequent photo-stops would be a bit bothersome, but we managed to keep things moving. 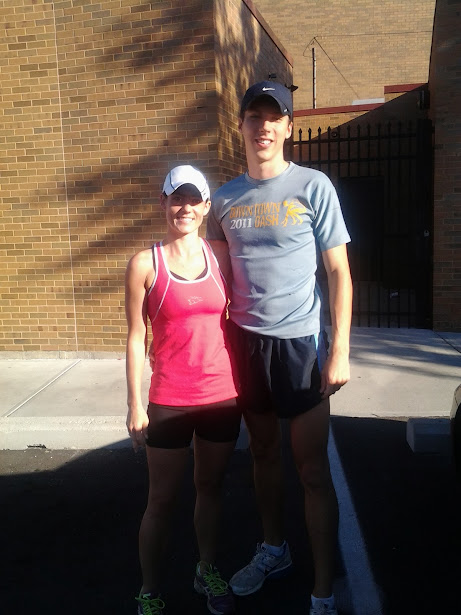 As for Pleasant Ridge, we had been looking forward to this run for some time. Not only because of the neighborhood’s “runability” (there is even a Pleasant Ridge Running Club)  but also because it is  on our short list of places to potentially buy a house.  Our first trip to Pleasant Ridge was back in 2008 for Molly Malone’s Gaelic Gallop, a 3 mile race benefiting the Special Olympics.  Here is a picture of Kayla after that race. (note: her prize wasn't that nose stud).

We started from the Pleasant Ridge Rec Center on Ridge Avenue. There were lots of people out enjoying a beautiful Saturday morning.

From the Rec Center we wound around the neighborhood for an introductory loop. I liked what we found: quiet streets; a few friendly runners; undulating but not overwhelmingly hilly terrain. 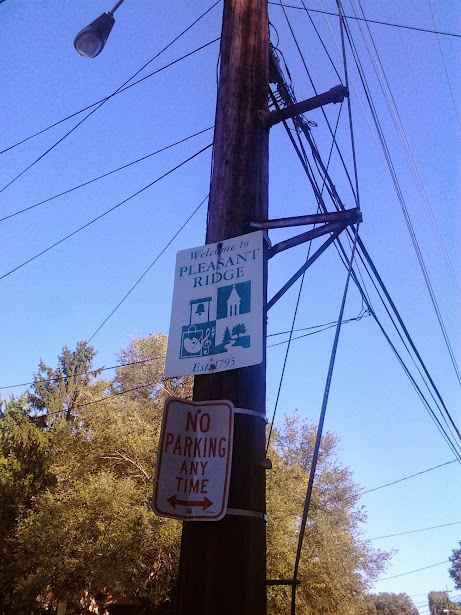 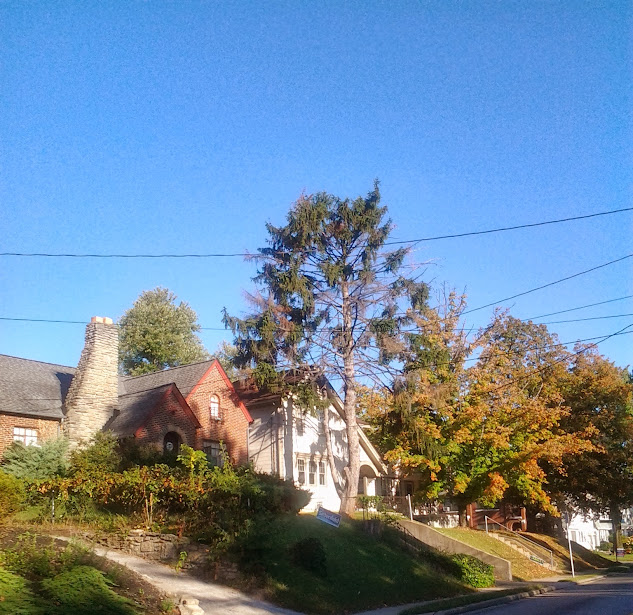 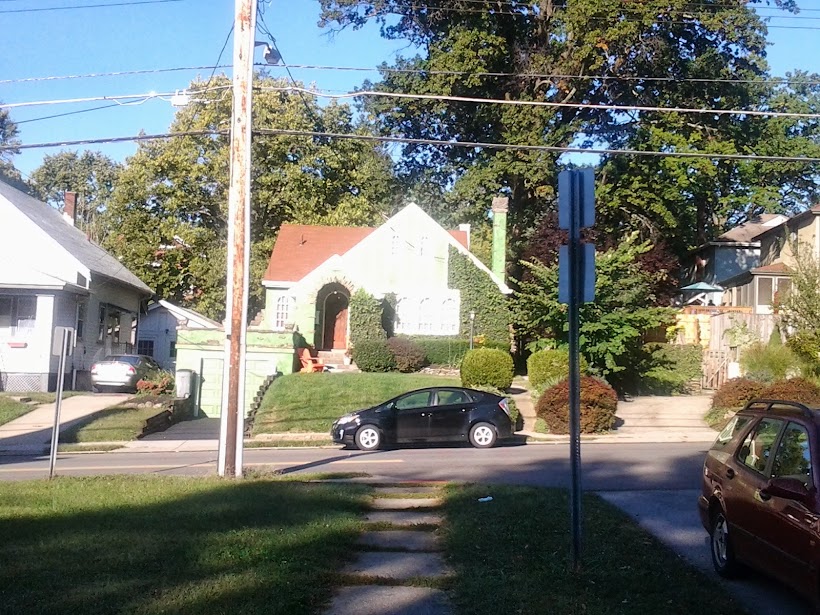 Emerging from the residential blocks, we found Montgomery Road. Across the intersection was Pleasant Ridge Montessori--the CPS neighborhood school. 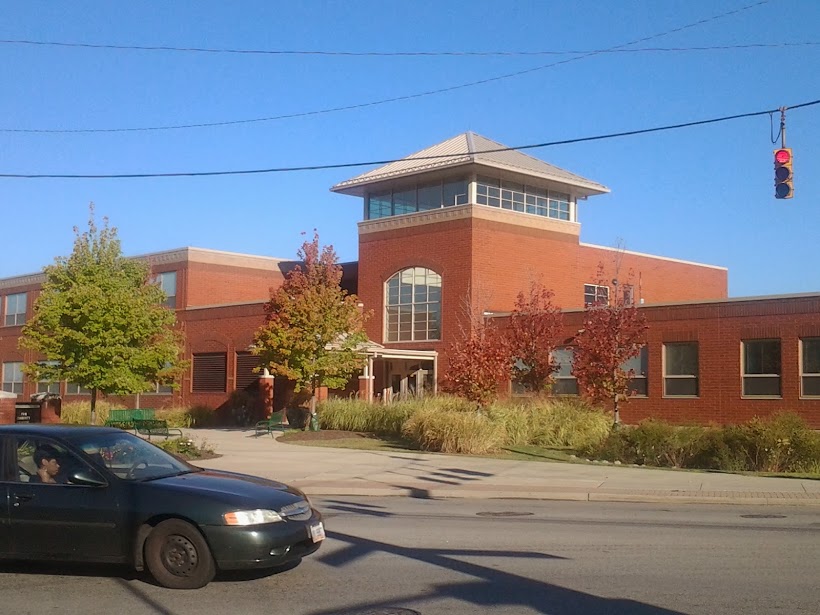 As we ventured north on Montgomery, we entered the Pleasant Ridge business and arts district., but not before stopping for a photo-op near a Pleasant Ridge banner. These three are brochure material! 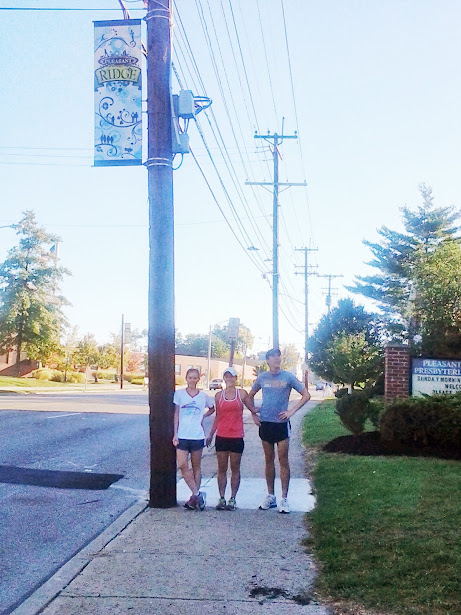 We weren't far on Montgomery when we came upon Pleasant Ridge Chili. Neither Kayla or I have ever been to PR Chili but Pat and Kim assured us that the food is covered in gravy (perfect for me) and the restaurant is open until 3AM (perfect for Kayla who is just waking up around then). 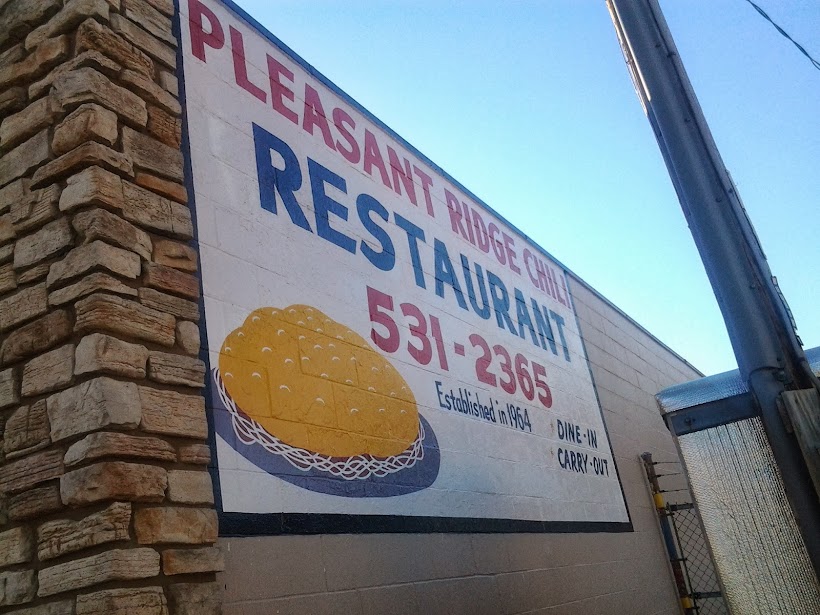 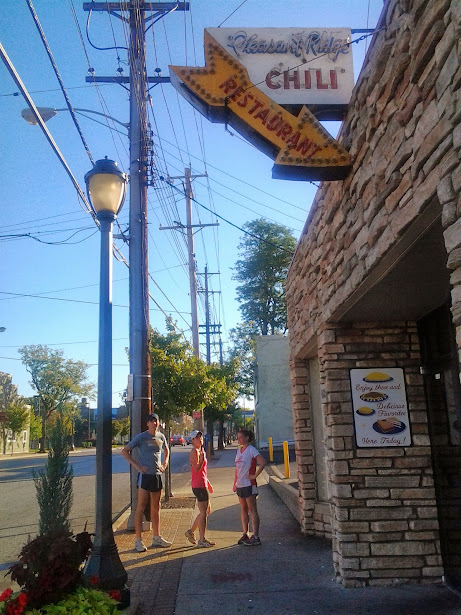 The Pleasant Ridge business district is supported by an initiative called District-A.  The purpose of District A is to promote the arts along the Montgomery Road corridor which includes both Pleasant Ridge and Kennedy Heights. One of the sites along the way was Emanu, an Ethiopian restaurant, which, given Ethiopia's dominance in long distance running is a better option than P-Ridge Chili. 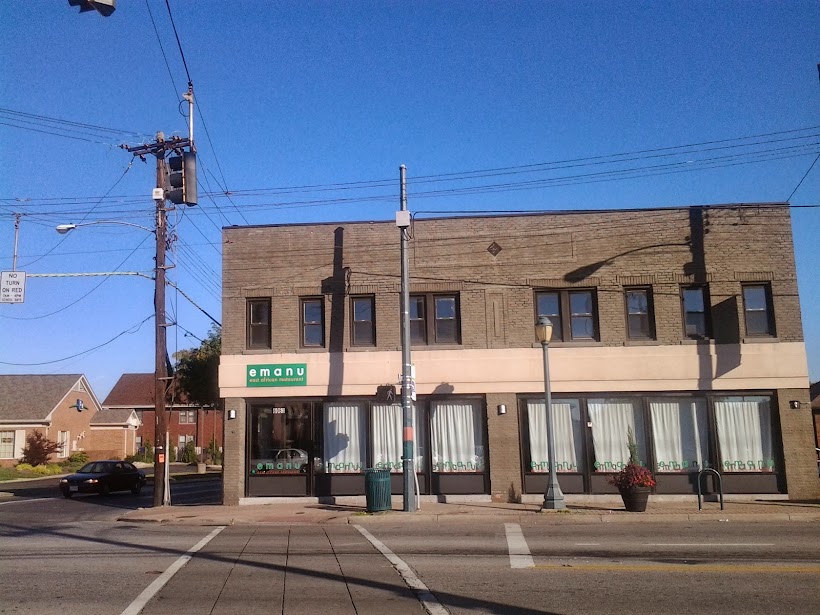 The Coffee Exchange is the local coffee shop. 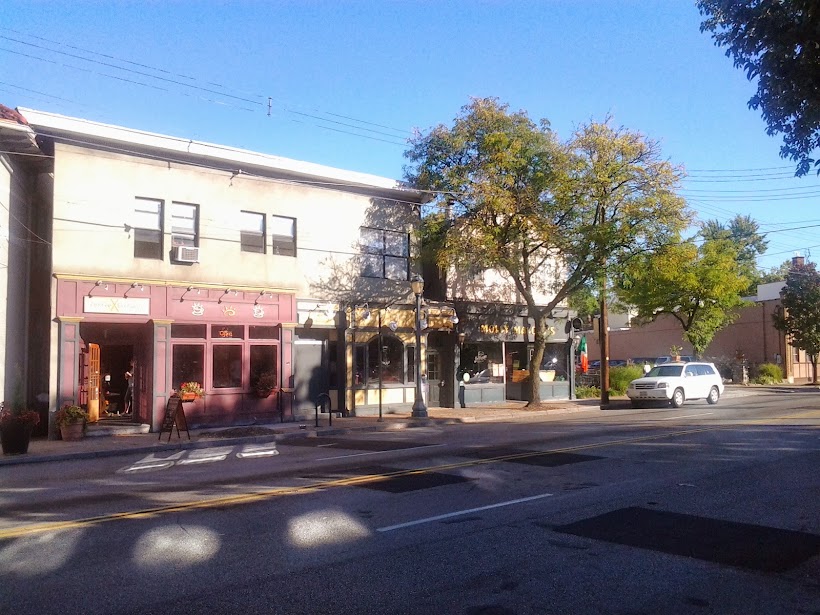 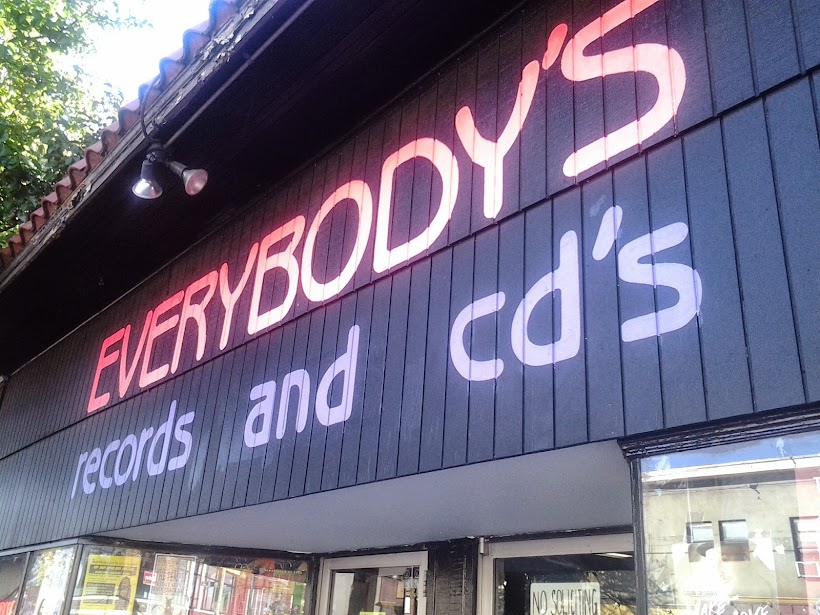 After crossing Ridge we were ready to check out some more of the neighborhood. We headed down Grand Vista, which features some impressive homes and some good running. To keep things moving, I photographed as I ran so I am missing from most of these shots. 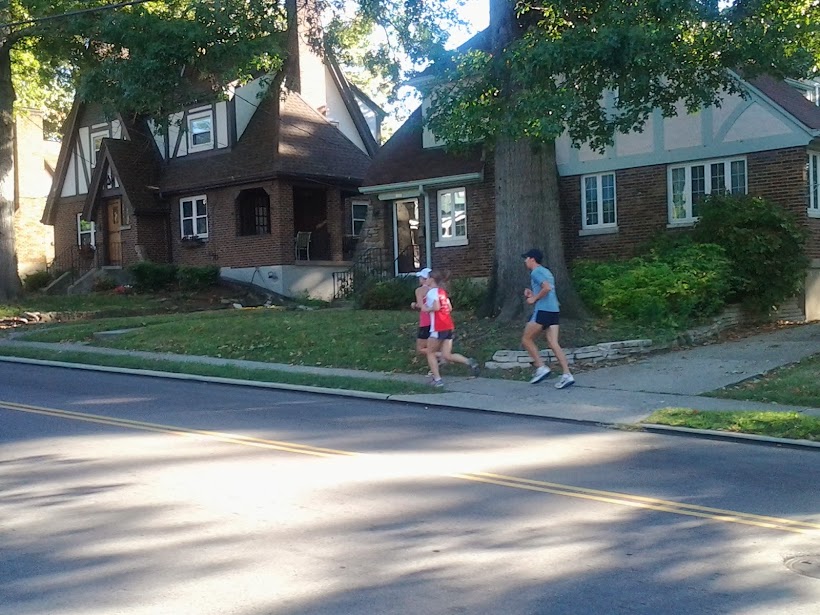 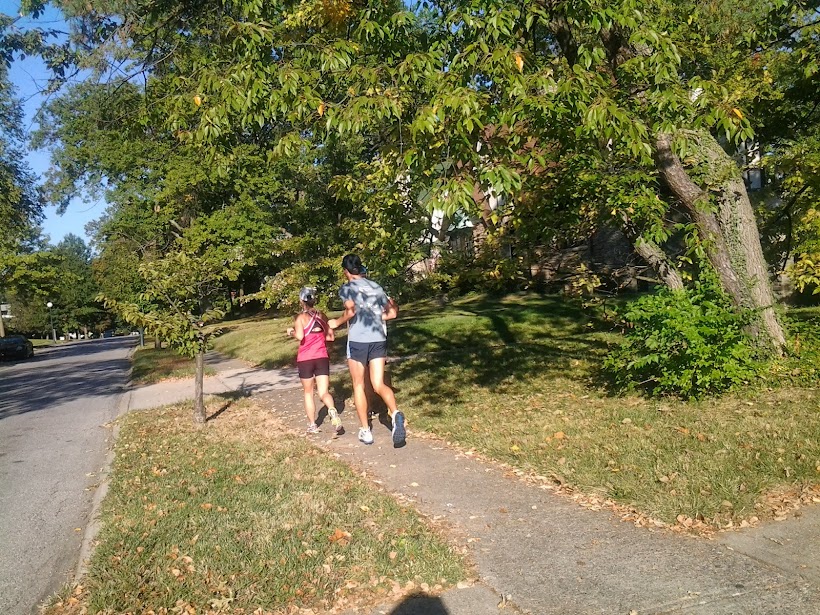 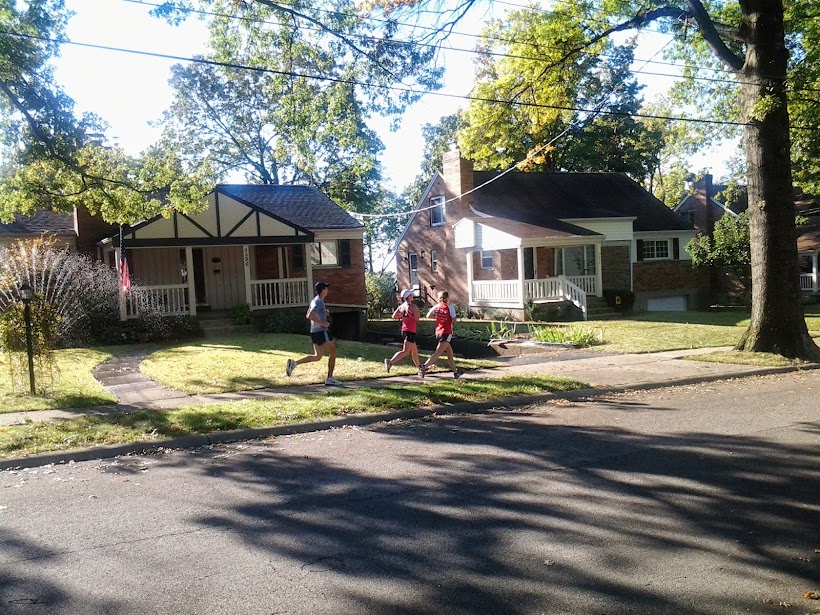 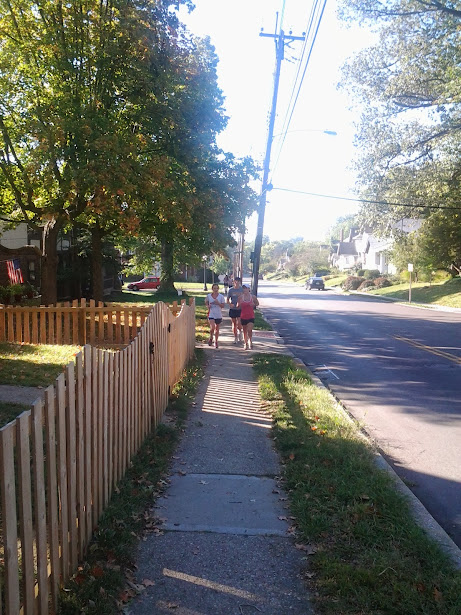 Despite its reputation for being a diverse neighborhood with open arms, we discovered that even idyllic Pleasant Ridge hadn’t escaped the great wave of anti-German hysteria. 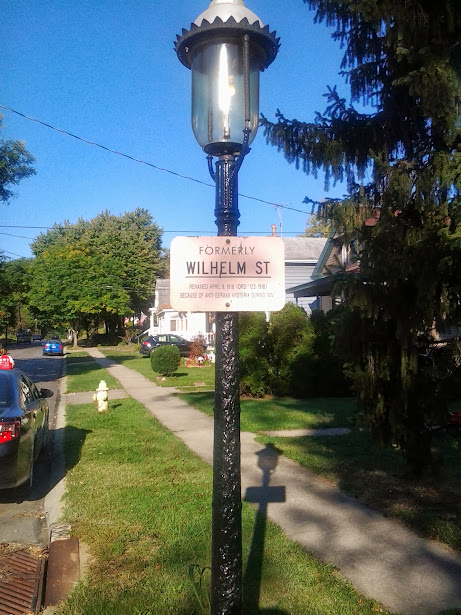 Once we were done, Kayla and Kim jumped on some swings and took in the fresh air on a sunny Saturday morning. 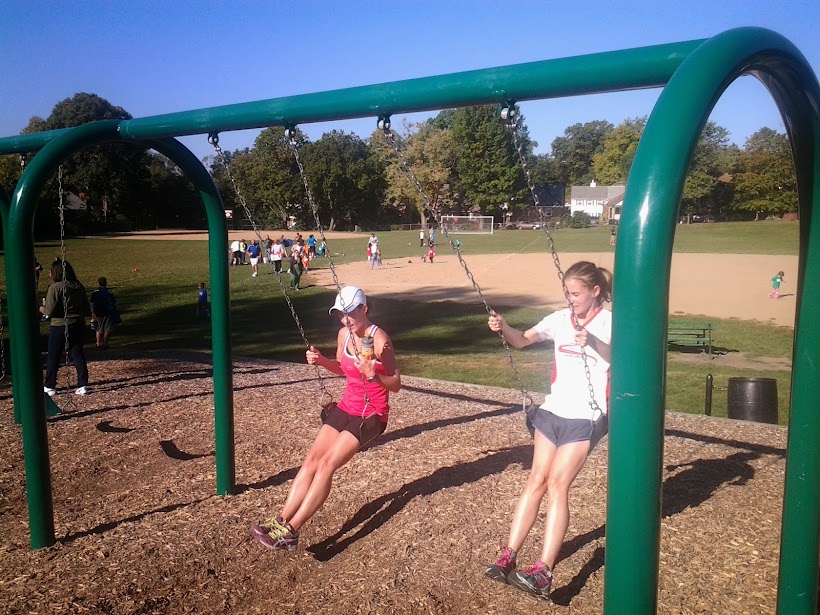 Pat and I spit on the ground and cursed. 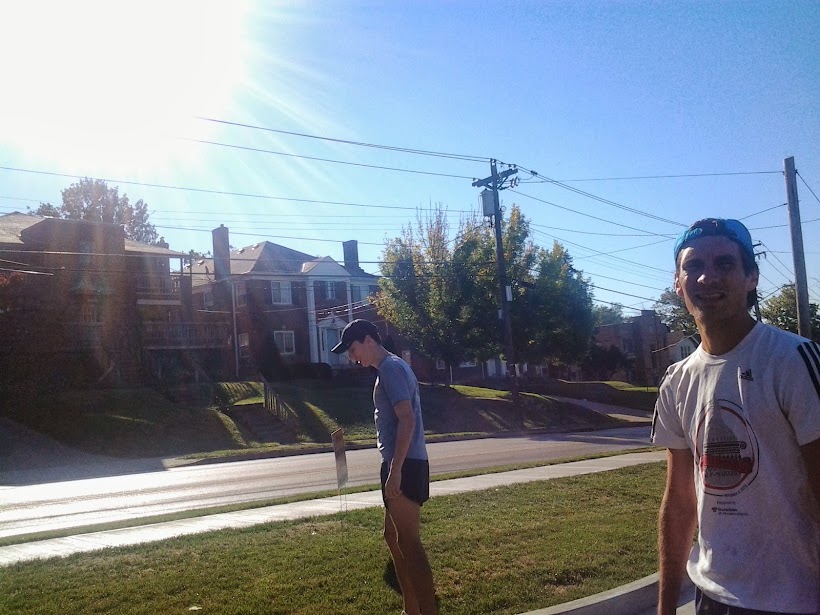 But seriously, Pleasant Ridge was a great run. We had the chance to explore another neighborhood on foot; we had great company; and we found plenty of reasons to return. Having completed the last of the "P's" we were ready for Queensgate. 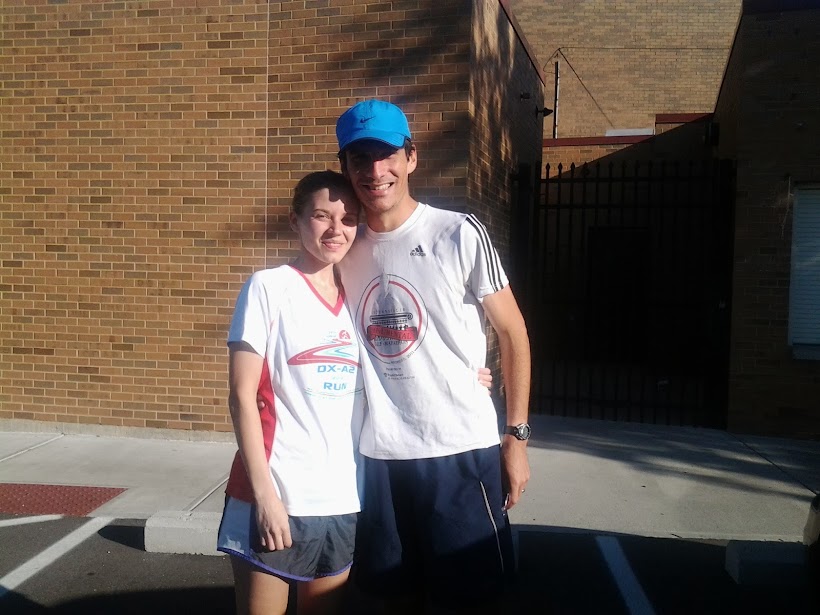