Trail 52: The idea of trail running and Ault Park

Yeah, I know. This is my first post in a while. So here I am showing my commitment to the project as Kayla recuperates (just another week or so and we should be charging forward through East Price Hill!). After a little hamstring set back, I've returned to running, but not with much purpose.


For me the problem has always been the disconnect between the idea and the practice. My idea of trail running features visions of me leaping over fallen trees, tip-toeing through creeks, and charging up muddy slopes. My practice of trail running has never included any of those things. Instead, I fall over trees, wade through water, and slide backwards down muddy hills.
Still, I enjoyed this morning's trail run quite a bit. So here are a few tips for trail running, and maybe life, too: 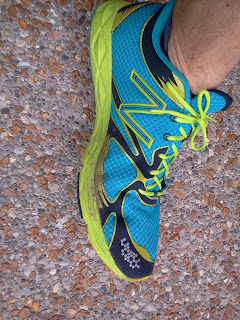 #1: Wear your regular old running shoes: do you own bowling shoes? 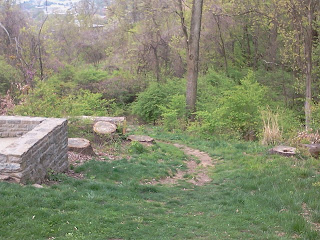 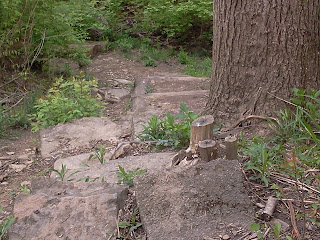 #3: Watch for stumps at the top of rocky stairways leading to the bottom of sharp downhills. 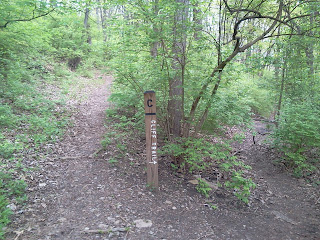 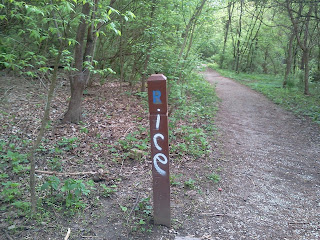 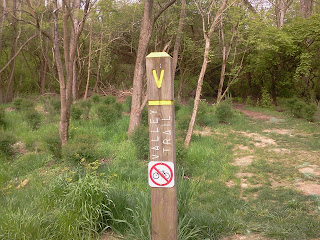 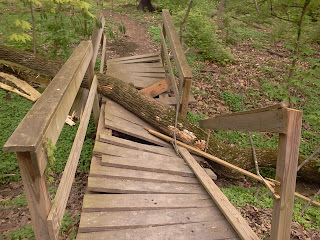 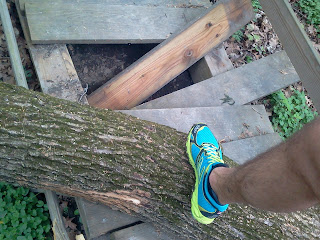 #6 Even if the crossing becomes precarious, 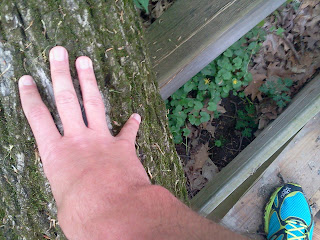 and you’re not really running anymore. 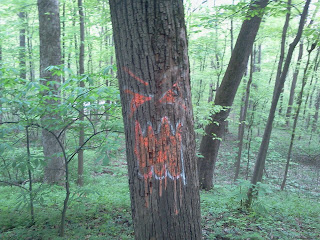 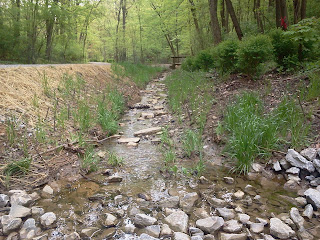 #9 Stop to look at the nice retention creek, but don't inhale! 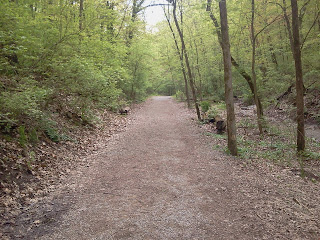 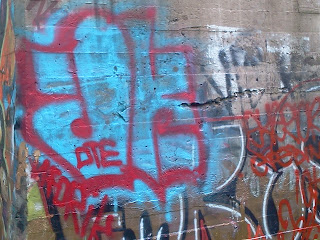 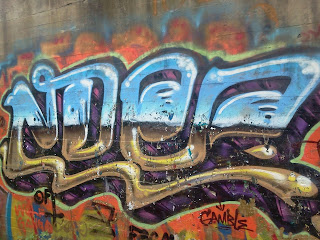 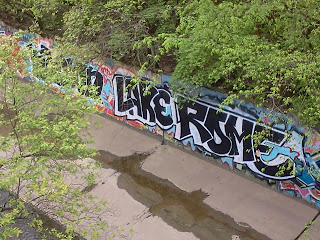 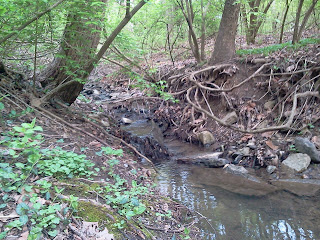 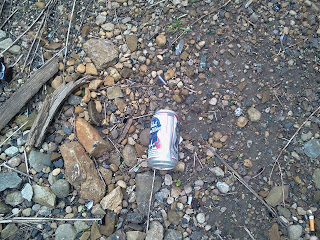 Things I love on another weekend of no running....
Saturday morning at The Contemporary Arts Center: 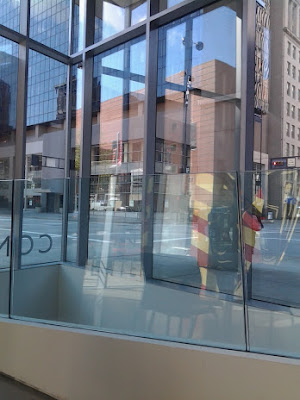 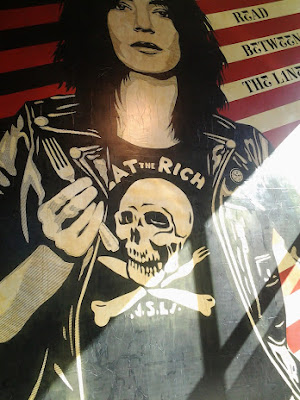 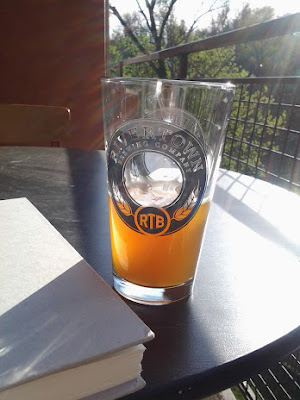 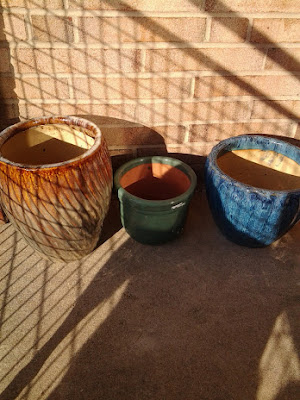 Not pictured: The Portland Cello Project, The Language of Flowers, and the  "spicy ranch" salad dressing that I made with Sour Cream and Tapito:
1 Tablespoon Sour Cream
12 Shakes Tapito Hot Sauce
A few splashes of water
-Love, K (almost healed)
Posted by Kayla at 7:15 PM No comments:

The Verdict is Just

I went to the sports medicine doc on Thursday.  I had to take an hour off work and drive through a downpour to get there but I was excited because I was feeling about 98% better and hoping for good news.


I had picked Tri-State Orthopedic which is connected to FitWorks and has its own physical therapy room.  I was fully expecting that the doctor would try to sell me on physical therapy sessions and put up a fight when I refused an x-ray, but neither of these things happened.  These guys were so good.  I got to see both a doctor and a nurse practitioner who just listened for a long time to my symptoms and history and affirmed the diagnosis that I had come up with:  stress reaction in my pelvis.
Although twelve days of complete rest had left me almost entirely pain free, we settled on a plan that includes two more weeks of no running (for a total of one month).  Over the next two weeks I’m free to walk and do pilates or yoga.  They said I could swim, but that’s not going to happen.  Mainly because I don’t really know how to swim for exercise, but also because none of my bathing suit attire is actually meant for the pool.
After two weeks I can try to jog a mile.  Slowly. If I have any pain or discomfort I need to take more time off. Then I can add three minutes or a half mile every day as long as I’m pain free.  He said I should be back to where I was in six more weeks, which will put me at eight weeks from the onset of the problem.  Not bad, especially since I was able to avoid crutches this time.
Knowing what the answer would be before the words even came out of my mouth, I asked if I could run the races that I had planned for April and May.  The doctor said it would be fine if I was willing to go slow and not put in the intensity.  Which might as well mean “no.”  So I won’t be running the Rat Race, the Little Kings Mile, or the Go OTR 5K. The only one I had prepaid was the Little Kings Mile so I’m only out about $30.
Of course, we discussed the reason I got this stress reaction (increased intensity and duration, possibly overcompensating from the sprained ankle I had after the Carthage run) and how to avoid the problem again in the future (get back on calcium supplements, take at least two days off running every week, give myself at least one day a week of complete rest).  They doctor told me I was “smart and reasonable” for a runner, which I think meant that I never tried to run through the pain and that I’m willing to take the time off necessary to heal completely and not prolong the issue.  He also said that now that I’m “getting older” my body won’t recover from high intensity runs as quickly as it did five or ten years ago.  Ha!
Oh, and the nurse practitioner adjusted my leg length with a little pushing and tugging, which put me back in place.
I’m disappointed that I’ll miss some of the most beautiful running weather and foliage that Cincinnati has to offer (this is the blossoming week—the trees are just gorgeous!).  However, I think we’ll be able to finish Run 52 this year if this recovery goes as planned and we double up for a couple months.


Not sure how to illustrate this post, so here is a picture of me writing it: 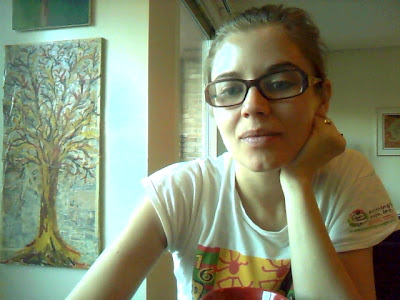 Obviously, I got fixed up for the occasion.
Also, Mel and Nick, I'm sure you have more important things to do today than read this blog, but in case you read it later, I can't wait to watch you guys tie the knot tonight!  So excited for you!
Posted by Kayla at 8:57 AM No comments:

Well. I definitely have a stress fracture. Or at least a stress reaction, which I've seen described in my medical research (aka compulsive internet searches) as a "wannabe stress fracture." I shouldn't be surprised. This is actually the third time running has given me a stress fracture, although it's been about six years since the last one and I'd almost convinced myself that wearing the right shoes had solved the problem.
Nope.
I really need to accept the fact that I am not a distance runner and that regularly running further than 8 miles at a time is just not good for my porous vegetarian bones.
Also, I should probably have been taking the calcium pills that I bought in bulk and let rot on the shelf.
I have an appointment on Thursday to have this confirmed and get an official rehab schedule, but like I told Donnie, I'm basically a doctor so here is how I have arrived at this diagnosis:
History of stress fracture: The first one came in early 2004. As soon as I learned to control my side stitches I felt this wild euphoria and immediately upped my mileage to 7-13 miles a day. Because I didn't have the base mileage, I wound up with a pretty severe stress fracture in my right femoral head and was on crutches for almost 12 weeks. The second one came in early 2007. It wasn't nearly as bad--a stress reaction on the left side that barely showed up on an x-ray. That time I was on crutches for about 6 weeks. After the second one, I had a really good physical therapist who told me that a leg length discrepancy was leading me to overcompensate. I went through months of strength training and got fitted for the right kind of shoes. And I've been running pain and injury-free for the better part of six years.
Current symptoms: The races that I had planned for the spring led me to increase both the duration and intensity of my runs. The pain started after a series of hill repeats on 3/25. I thought it was just adductor tightness until an interval workout on 3/28 left me limping. Now I feel stabbing pain when lifting my left leg or bending over to put on pants. I can sort of feel it from just walking, but really only when I'm wearing heels, which admittedly I shouldn't do given my current condition. I've been coming home from work and icing it and trying to restrict my movements as much as possible, all in the hope that by the time I see the doctor he'll say I'm out of the danger zone and can skip the crutches.
Eh, this is all probably TMI for the casual reader of this blog. The bottom line is, I'll probably be off running for a minimum of 8 weeks and a maximum of 16 weeks.
What does all this mean for Run 52?
First, I am committed to finishing this project. We will finish it. It might not happen in this calendar year like we had planned, but it will happen.
Second, not being able to run has left me with a huge expanse of time. How will I fill it? Hopefully with something more productive than watching endless episodes of Dance Moms and looking at Facebook. I hope to use this downtime to remind myself that there is more to life than running. There is more to me than running. Recently I've been turning down too many invitations and events because I have to run. I've been leaving work at 5:00pm on the dot to come home and run. I've left a stack of books on my night stand untouched.  I asked a friend to plan her bachelorette weekend around one of my races.  (Whoops, that last one seems pretty selfish now that I type it out!)
So over the next eight weeks I'll probably have a few more afternoons like this one: 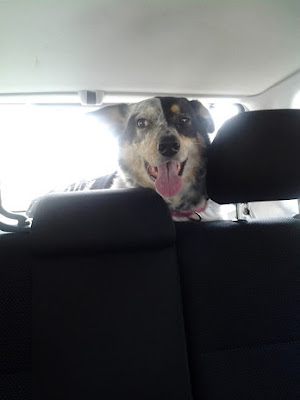 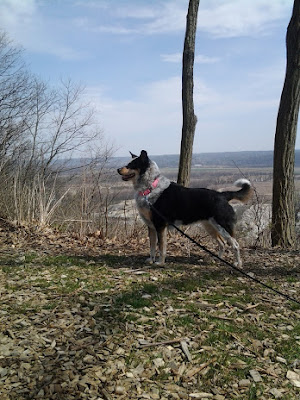 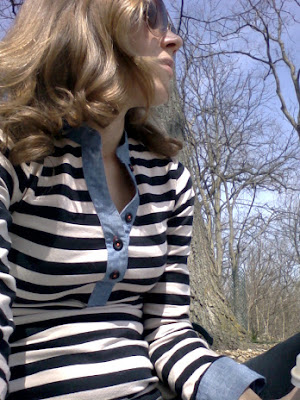 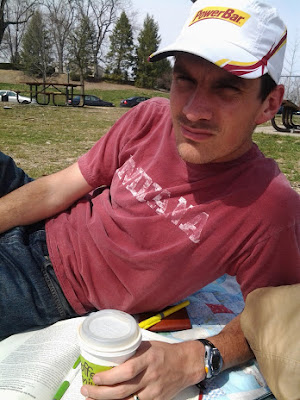 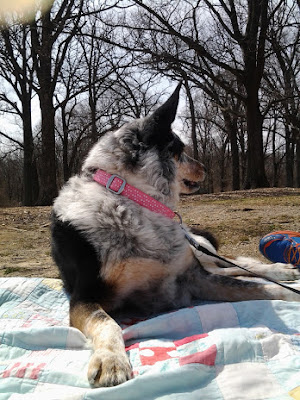 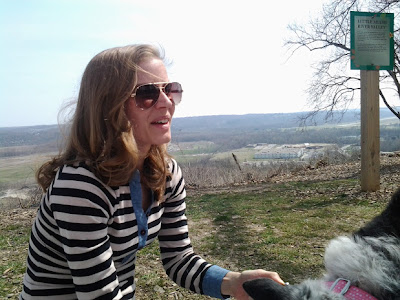 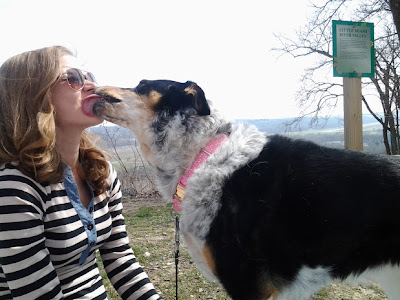