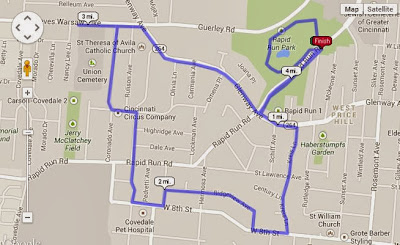 On Thanksgiving morning, Rapid Run Park in West Price Hill was empty except for an older woman, bundled up in a long coat and a big hat, walking her dog.  She wished us a happy Thanksgiving and asked if we knew what time the parade started.  This short conversation gave me the time to realize that although it was cold and a light frost was still speckling the grass, I didn’t really need my gloves.  I dropped them off at the car before making a second circuit around the park. 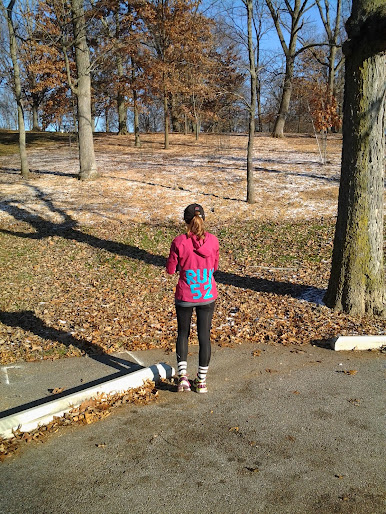 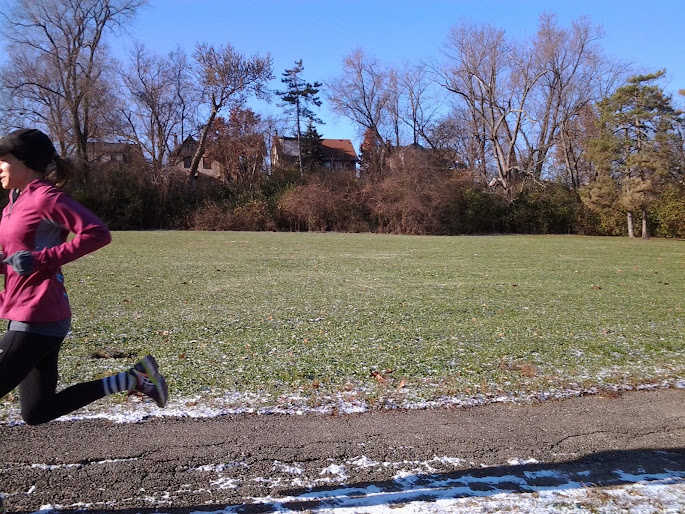 Rapid Run Park is hilly and full of stately trees.  There is a shallow lake—drained for the winter—which is known for being “one of the best places to launch a toy boat.”  I’ve heard that the west side high schools use the park as a cross country course. 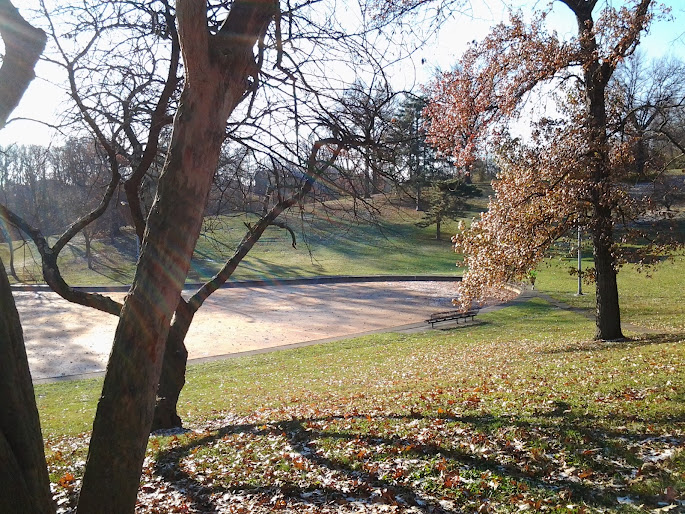 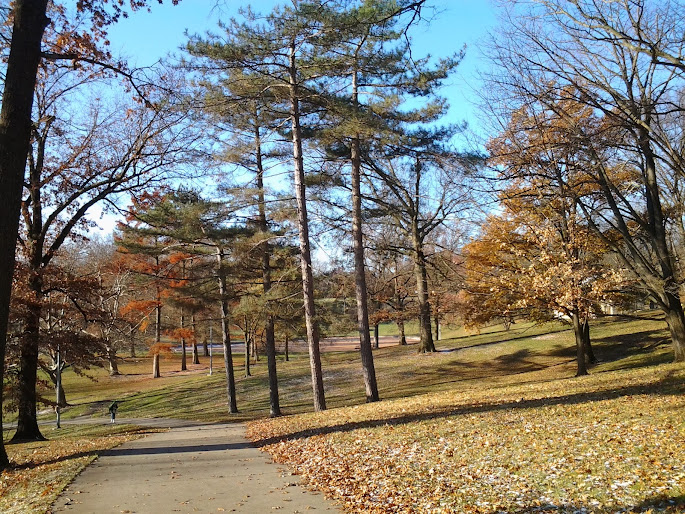 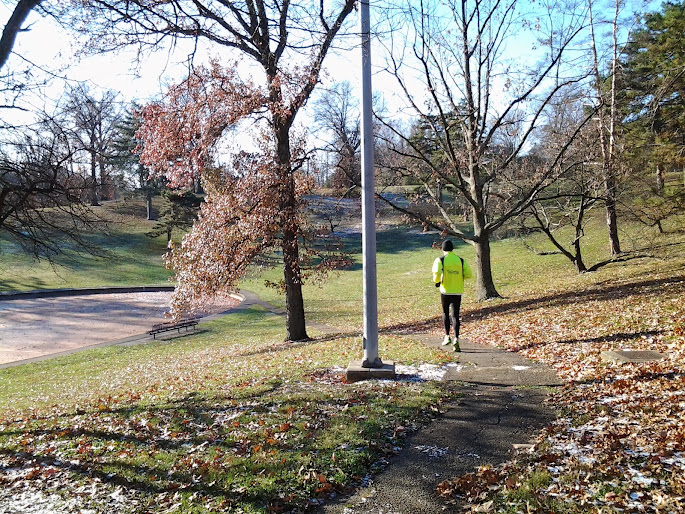 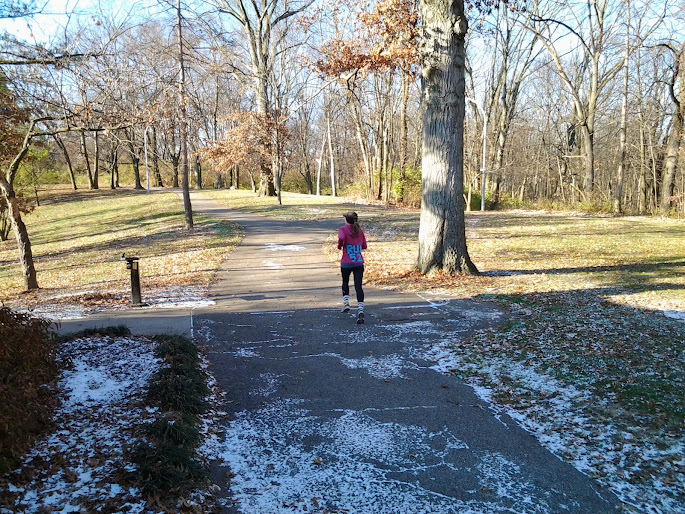 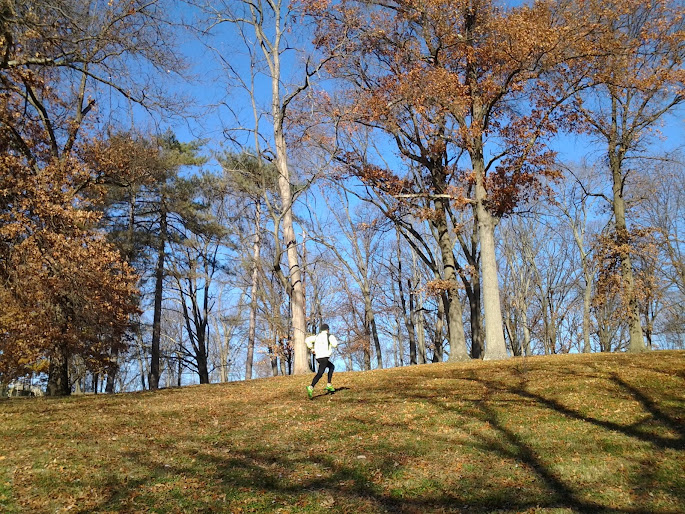 The picnic shelter here is another example of our city’s fine park architecture: 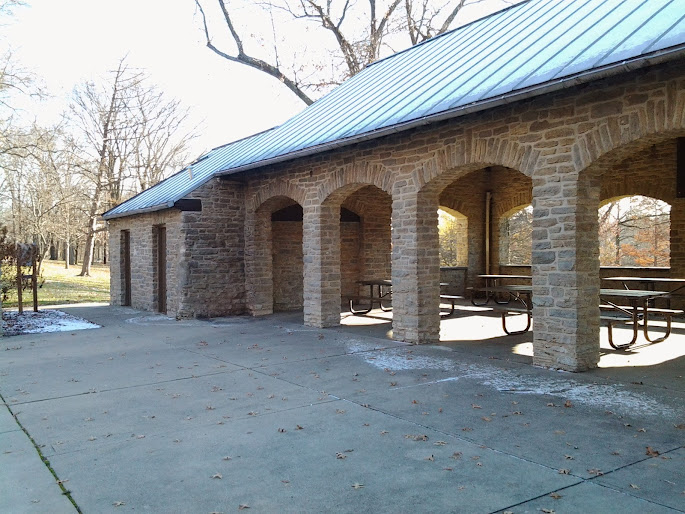 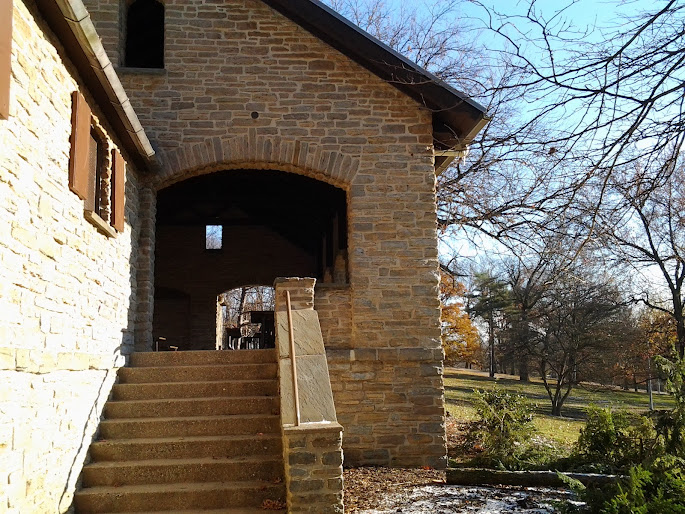 We really could have done our entire run in Rapid Run Park and been perfectly content, but West Price Hill is one of the city’s biggest neighborhoods, and we knew we had to work up a good appetite for afternoon meal.  So we headed up Rapid Run Road to Glenway, where we cut over to Kreis Lane.  This jaunt down Kreis and up to Ridgeview was familiar to us from having run the Price Hill Pacer 5K several times. 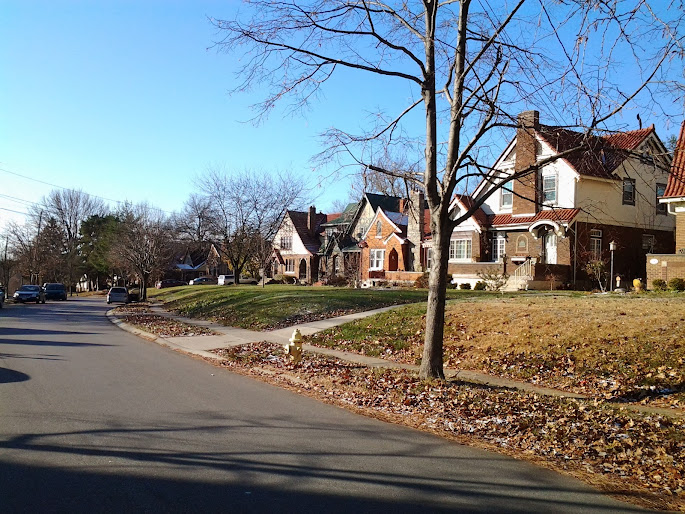 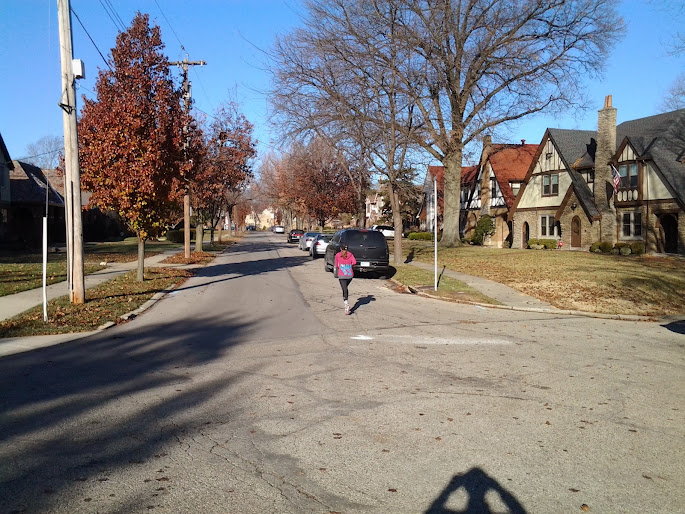 For the next two miles, we ran through West Price Hill’s residential streets and through Covedale, which is a district of the larger neighborhood.  The houses along this route are so pretty—most of them are Tudor or craftsman.  The streets and sidewalks here were very “runnable” (I’ve coined this term, FYI) and lots of people were out on their porches or in their yards, getting ready to head to the parade. 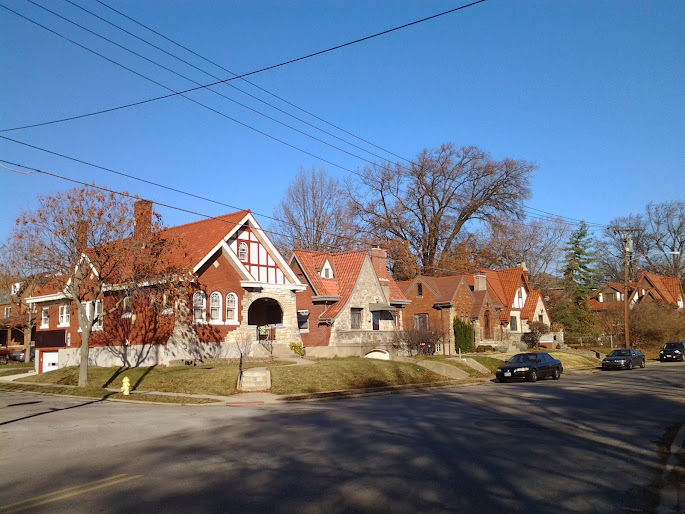 On West Eighth, we passed a row of businesses that included the Covedale Pet Hospital and its sunshine mural: 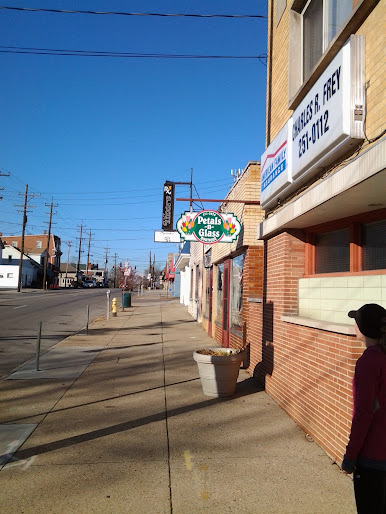 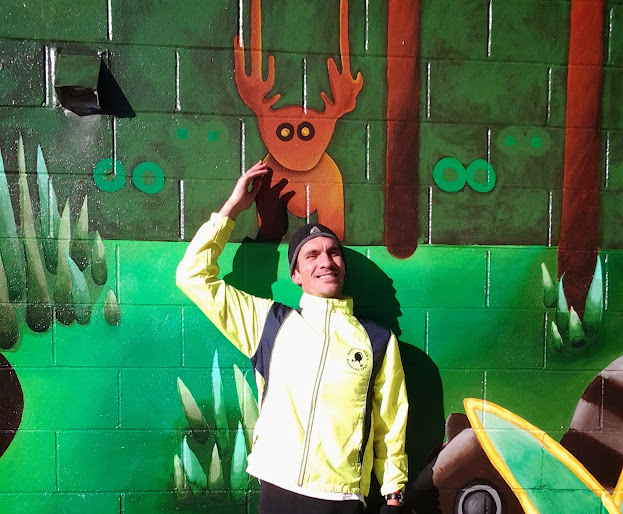 On a handful of occasions our Run 52’s have coincided with a special neighborhood event: a Queen City Bike display in North Fairmount, the Hudepohl 14k in Pendleton, the Hyde Park Blast.  On Thanksgiving morning in West Price Hill, the neighborhood gathers along Glenway Avenue for a parade.
When I hear the sounds of a parade my heart swells on cue.  For me, a marching band can strip away both the cliché and the academia from words like “civic” and “community” so that I’m reminded of what those words really mean to people, and how those words feel. 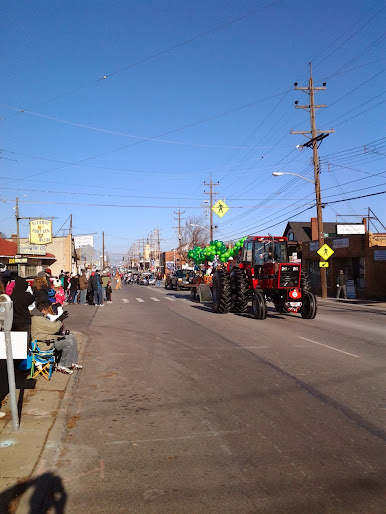 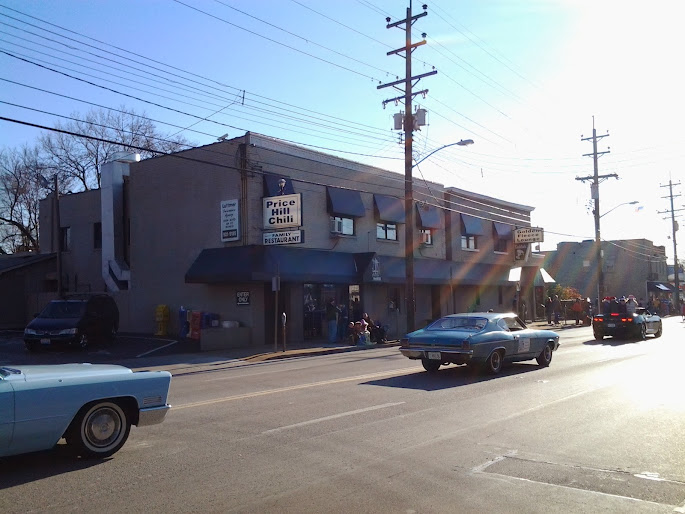 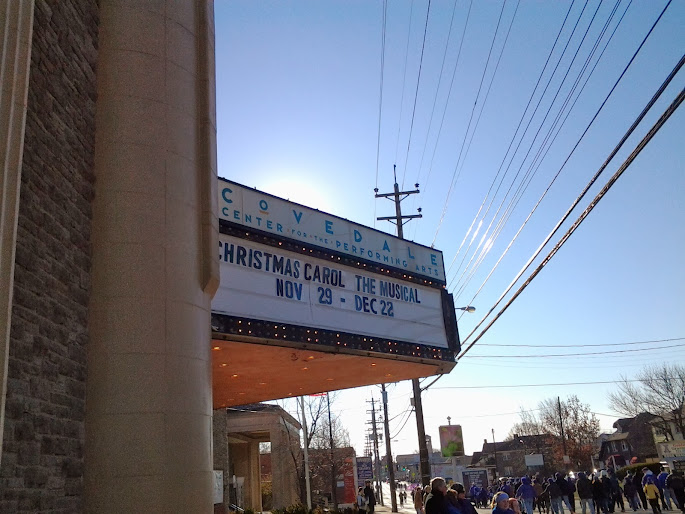 The parade makes its way through the Glenway business district—past the Covedale Center for Performing Arts, Sebastian’s, Price Hill Chili, Hart Pharmacy, and many other neighborhood institutions—and is meant to usher in the holiday season.  Another sign of the holiday season is the Christmas tree stand on Glenway.  We could smell the pine from across the street! 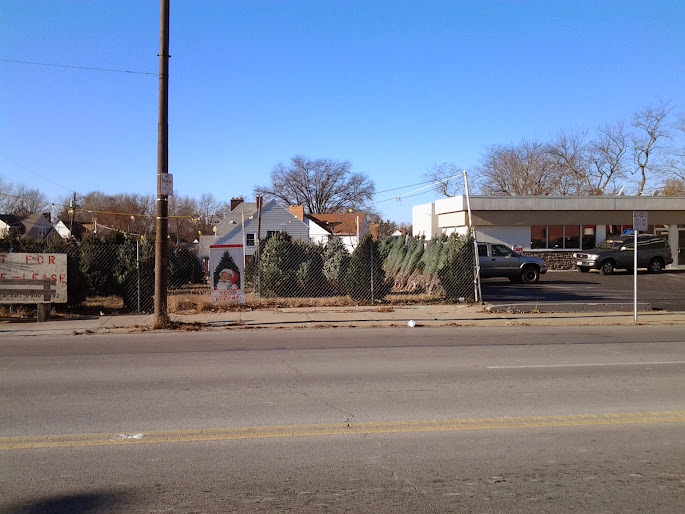 When it was possible, we tried to run behind the spectators and not disturb their view, but we couldn’t resist the neighborhood sign: 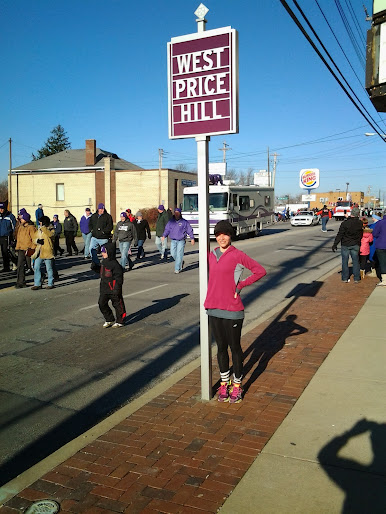 This was route number 50 of 52.  The challenge is nearly complete!
We know we have so much to be thankful for this year—each other, our health, our friends and family, our city.  I could go on and on.  In fact, at dinner that evening when it was my turn to describe what I was thankful for, I did go on and on.  My dad had to cut me off so that Donnie could have a turn.  Ha!