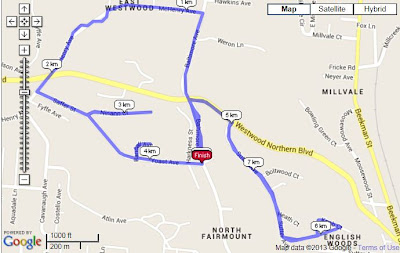 East Westwood is a tiny West Side neighborhood.  It is less than one square mile and borders Westwood, Fay Apartments, and English Woods. 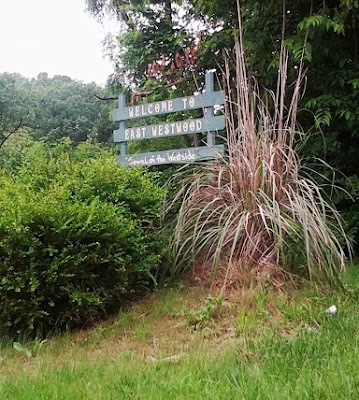 We drove the course first to get a lay of the land.  On our drive, we could see that there has not been a great deal of investment in the housing stock, which consists mainly of small single family homes and large two-and three-story apartment buildings.   On McHenry Avenue, several of the commercial spaces are being operated as carry-out stores. 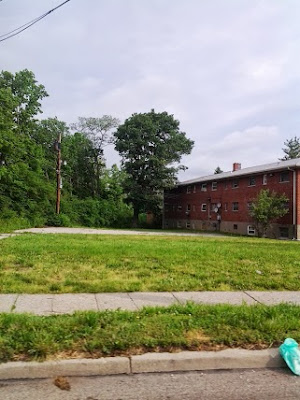 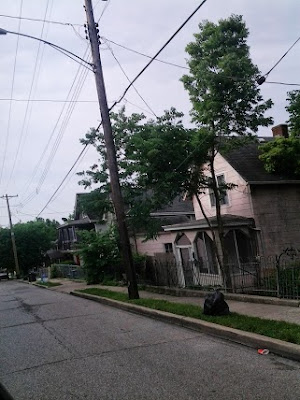 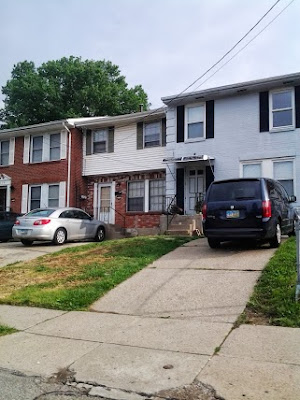 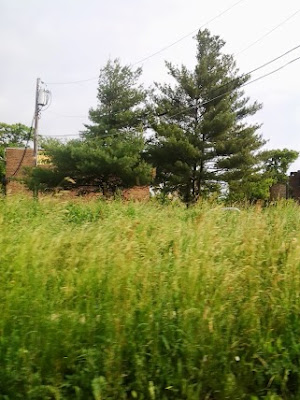 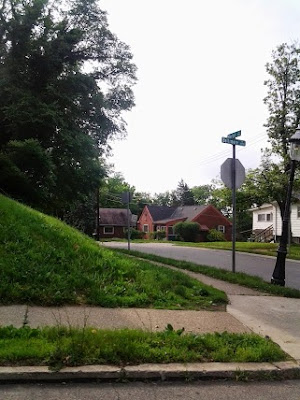 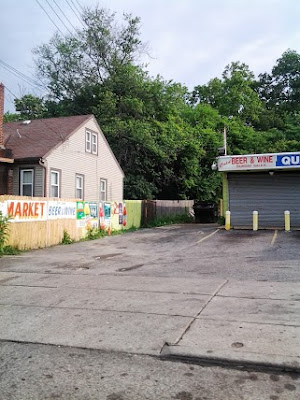 On Saffer Street, the sidewalks end abruptly and the street dips into a wooded “holler”. I like this pretty house on the side of the hill: 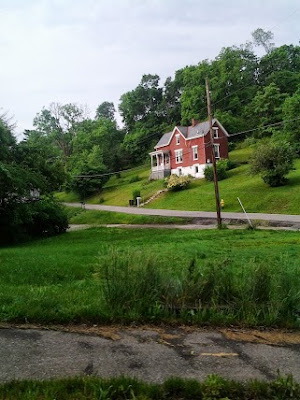 To start out, we parked near the former Aiken High School and ran down its driveway to look at the now-empty buildings: 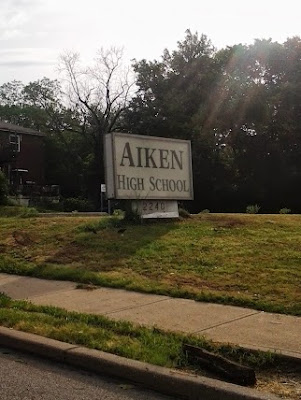 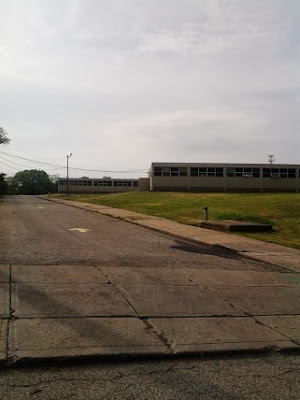 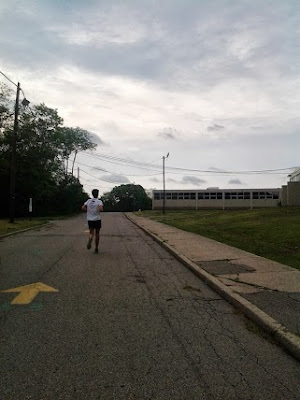 There is an amost pastoral practice field on the school grounds: 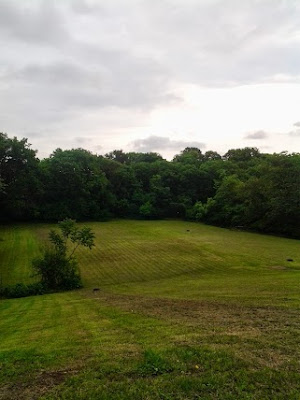 After running up Baltimore, we were supposed to turn left on McHenry.  However, after the dog scare in East Price Hill last week, I have to admit I was feeling a little nervous.  On our drive, we had seen several dogs off-leash and I didn’t want to risk it. 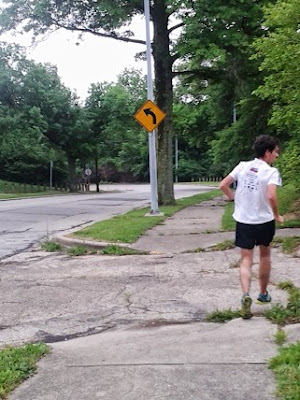 Let me leave East Westwood for a moment to talk about dogs and runners.  In all the miles I have logged in Cincinnati, I have only been bitten once.  This happened last February when I was jogging with Zola in East Walnut Hills.  We ran past a home that we had run by hundreds of times before.  On most days, the family’s Mastiff and St. Bernard would be outside and would bark at us from behind their electric fence.  I always assumed the fence would contain them and never worried much.  Except on one day, the St. Bernard started running toward us, broke through the fence, and lunged for Zola.  I know that my reaction to this wasn’t safe or smart, but I wedged myself between them and ended up with inch-deep teeth marks in my behind.  Afterwards, I bought a hot pink bottle of pepper spray and carry it with me when I run anywhere other than my normal route.


Let me also say that in no way do I think that any breed of dog is bad or inherently dangerous.  I don’t mean to imply that.  As a runner, it just makes me nervous when dogs are allowed to roam off-leash.  Because dogs are territorial by nature, I am especially scared when a dog is off-leash on its front porch or in its front yard.   Send a strange runner past, and you’ve got an unpredictable situation.


Next up was English Woods. East Westwood and English Woods are alphabetical and geographical neighbors, so it was easy to cross Baltimore Avenue and complete these runs back-to-back. 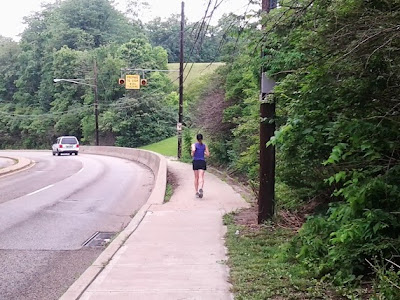 In preparing for our run in English Woods, we found an interesting article that was part of the 52 Neighborhoods One Voice series published by the Cincinnati Enquirer in 2010.  This article explains that English Woods was built as housing for military families and later became a Cincinnati Metropolitan Housing Authority community.  The Enquirer article also contains a link to a Google Map of whatEnglish looked like prior to demolition.
Seeing the density of the barrack-style buildings before they were demolished makes the wide fields more striking. With the exception of the chain link fences, running through English Woods today is not entirely different than running in a public park.  It’s green and overgrown in some places.  I saw a colorful finch and a sprinkling of wildflowers. Overall, it was peaceful.  There was a bit of the haunting feeling you get from being in an empty place where people once lived—the same feeling that Glencoe-Auburn evoked before it was demolished earlier this year. 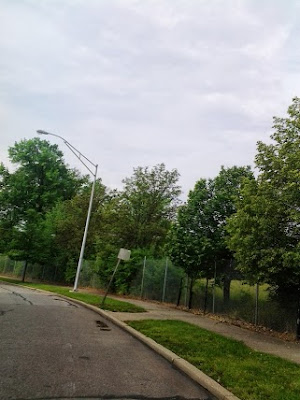 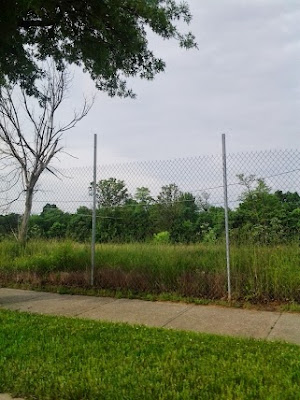 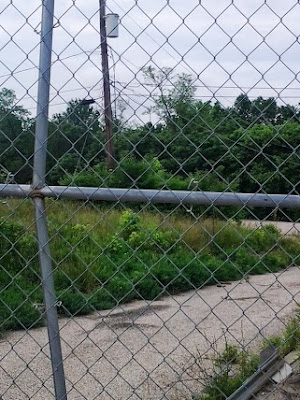 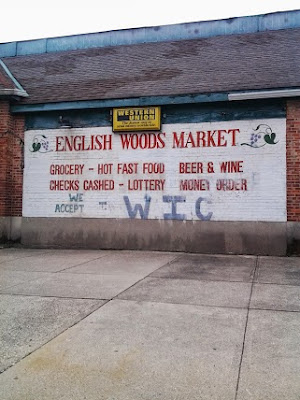 I liked seeing this memorial plaque from 1948, which was dedicated just a few years after the community was built.  I hadn’t realized that the City’s community council system dated back that far. 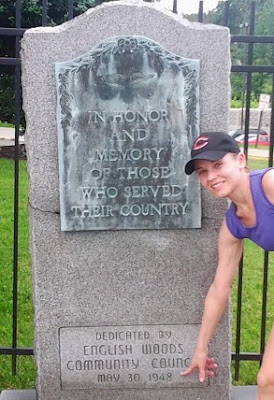 Recently, English Woods received a $200,000 Choice Neighborhoods planning grant from HUD to develop a blueprint for neighborhood development, educational opportunities, and job creation. To this end, the neighborhood has developed an assessment of its assets as well as a series of aspirational statements that residents and business owners would hope to achieve over the coming years.
Today, I felt privileged to have had the opportunity to explore English Woods’ past and present as its future is being written.  Like every neighborhood, it is an opportunity.