January 26, 2013 25 degrees. Cloudy. When we arrived we climbed out of the car and got warmed up (a tough task on this day) in front of Su Casa, which is in an old school building just off Carthage’s main business strip. We started south on Fairpark, heading through the residential area which looks similar to other northern-Cincinnati neighborhoods. There is a clear architectural mish-mash (my technical term) with really old brick two-stories next to more modern models (mine, too). Kayla pointed out this row of Potter Hill homes. We made our way east back to Vine Street, where we emerged in the business district. Here Carthage's Latin American influence emanates throughout the district. El Valle Verde, a restaurant/grocery store, takes up about a half block. In the next block is a coin laundry with two suns on its sign: they were good stand-ins for the one that was missing on this gray day. 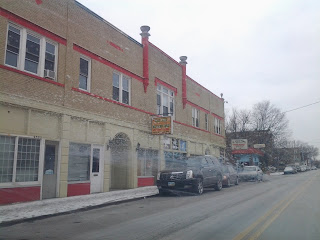 Down the street from El Valle Verde was this doctor's office, which is unlike any building I have seen in Cincinnati. On first impression, Kayla thought it was the library. 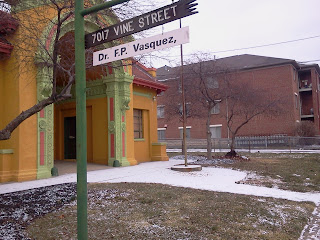 Our last stop before leaving the business district was Carthage's ArtWorks mural. This mural is entitled “A Postcard From Home.” At the top is a bilingual banner which reads “welcome to all”/“bienvendios a todos.” Contributing to the spirit of welcoming was a teenager who actually said hello to us as we ran by.  In such close proximity to the mural it seemed significant. 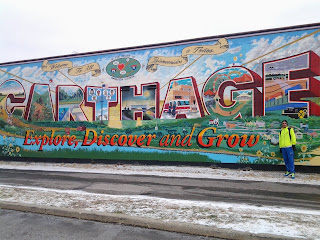 I should also add that Carthage is the first neighborhood where we spotted another runner. This guy was a boxer. He donned a cut-off sweatshirt and wore his hood up as he threw left and right jabs. We didn't stop and ask for a picture. Just beyond the business district, the layout transformed from quaint storefronts and unique architecture into car lots with giant Native Americans (there’s only one of these). 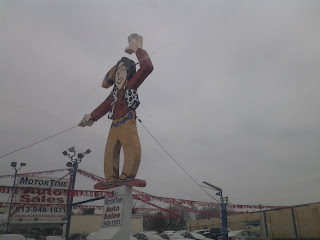 That is Chief "Pontiac." Not to be confused with Chief Pontiac.

Apparently the dealership's jingle was, “Where Paddock meets Vine at the Big Indian Sign...” History says the Chief’s arm once moved up and down and was decked with neon lights. Is the Chief just harmless kitsch, representing a different era, or is he a demeaning caricature? Up the street from the caricature, we arrived at the Seymour Trailhead. 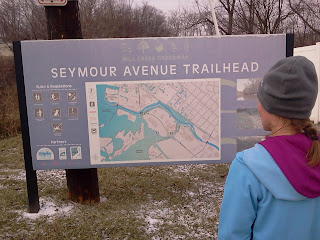 This was a great discovery, as I am always on the lookout for new trails. The stretch of trail we ran was quite short, yet it was also very scenic and totally flat. 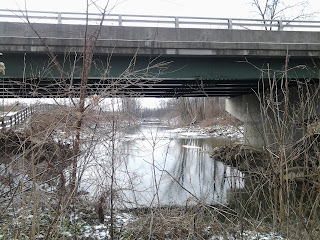 The trail would be a great place for some short, fast workouts. I ran along it imaging it being someday connected to Northside's greenway trail. Such an extension would result in just over 3 miles of trail. Then--just when I thought I was on to something--I came across this organization that is working for a 28 mile trail along the Mill Creek. Even better. 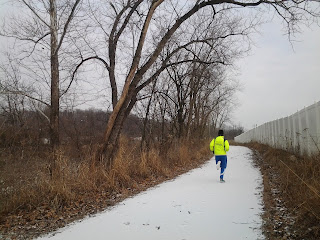 At the end of our run, I wanted to stop at the beer depot and get a picture of this "ice cold beer" sign. In hindsight, this was a terrible decision. 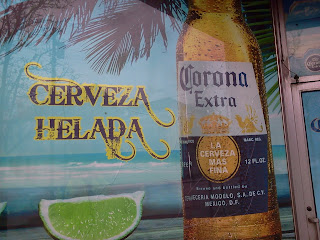 As I lined up the shot, I heard what I thought was a little kid screaming at the top of his lungs. None of my business, I thought. When I came to the alley next to the beer depot, I found the screamer--it was Kayla, and she was on her back holding her ankle. She had slipped on the ice (and, mistaking her for a little kid, I had totally ignored her). Fortunately, we got her to the car which was only a few blocks away. She spent the rest of the day watching Tia and Tamera. As of this writing, our challenge is not in jeopardy: consistent application of reality television has reduced most of the swelling. 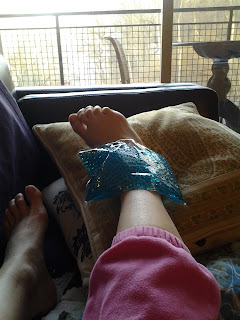 Unfortunately, grand, all-encompassing reflections on Carthage were limited by the urgency of the slip and fall. However, a trip back to El Valle Verde is definitely in order, and hopefully someday Carthage can be a nice stop along a fantastic trail.
Posted by Donnie at 12:39 PM