29 Degrees. Cloudy with light snow falling.
Can I admit something?  I was not looking forward to this run.  Clifton Heights.  University Heights. Fairview.  Three communities, one neighborhood?  Hills that make my stomach turn?  I knew this would not be easy.  Plus, I had been up half the night watching the Honey Boo Boo Christmas Special and a CNN profile of Jodi Arias, so my general outlook was pretty great.
To make matters worse, I had Taylor Swift’s “I Knew You Were Trouble” stuck in my head.
Blah, blah, blah. Get it together!
As it turns out, CUF is dizzying—as expected—but in a way that is full of pleasant, and sometimes breathtaking, surprises. 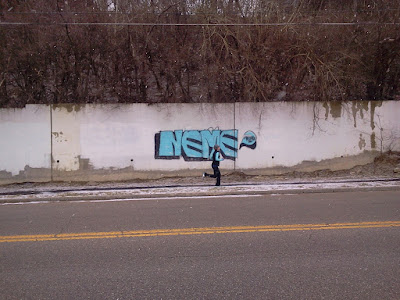 We ran by an old coffee shop and beer garden: 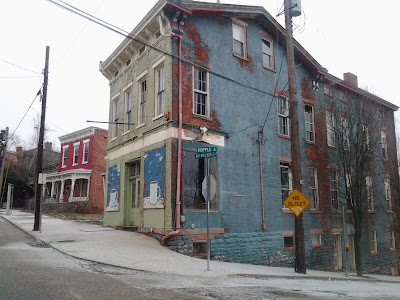 And this adorable cottage house: 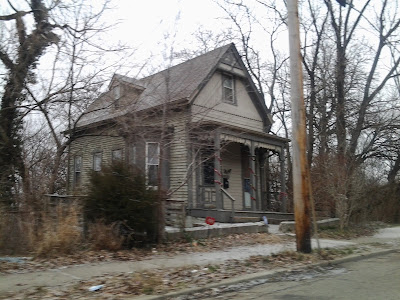 Then I had to run up Straight Street.  Donnie interviewed me with his camera phone before our ascent to ask how I was feeling about the challenge.  I’m grateful that the interview didn’t record because my response was more broad than classy and I don’t really want to put that out there. 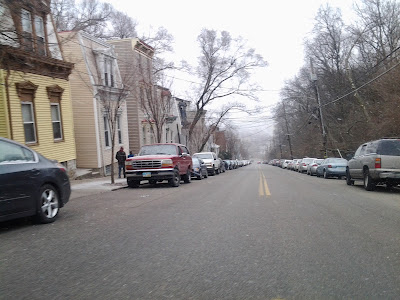 It was a small miracle, but I made it to the top.  This photo is looking down at where we started, except you can't see the base of the hill because it is SO FAR AWAY.

Next, we ran into Fairview park.  And how quickly my mood shifted.
The approach with its tall pines to one side reminded me vaguely of driving into Flagstaff, Arizona: 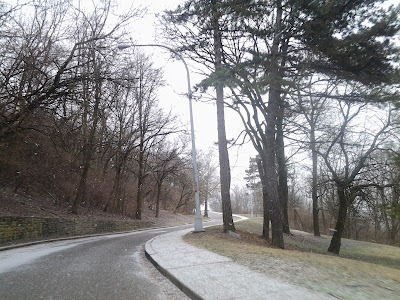 Then we discovered what must be one of the steepest of Cincinnati’s hillside staircases: 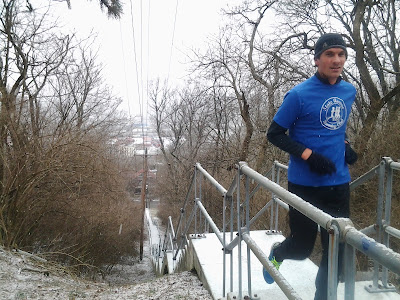 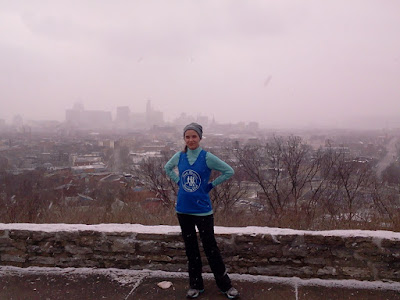 How can you feel anything but positive after looking out at the city from this view?
After taking in the view, we ran through some of the residential blocks.  Like in neighboring Corryville, many of the homes in CUF are student rentals beside well-kept single family houses: 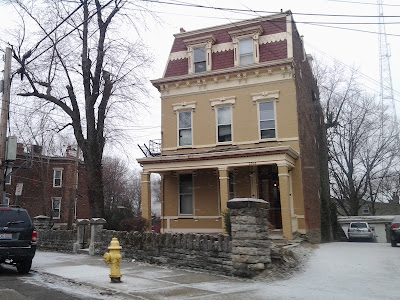 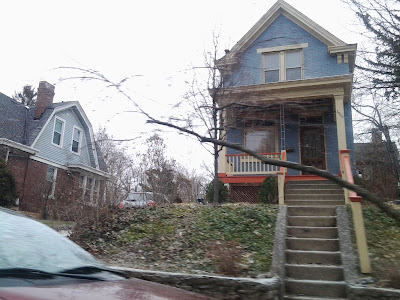 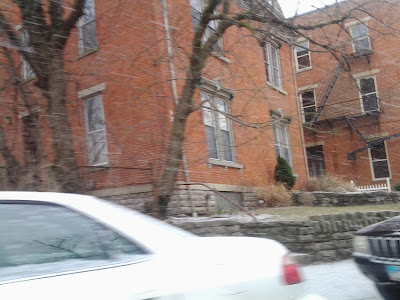 What I love most about the CUF residential streets is their density and the corner stores and pubs which are so Cincinnati: 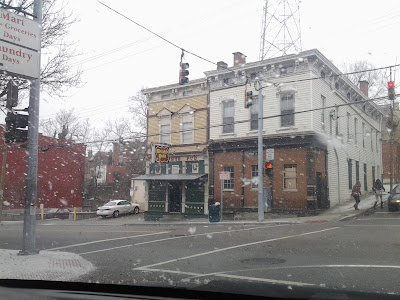 We heard church bells from the top of the hill as we passed the former Fairview Public School, which has been remodeled into a beautiful condo building.  Nearby, we passed three runners from the UC Women’s team, who gave us a friendly hello. 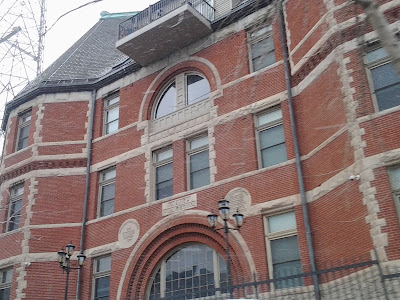 Next we passed Warner Street: 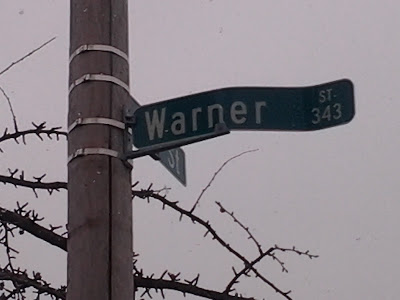 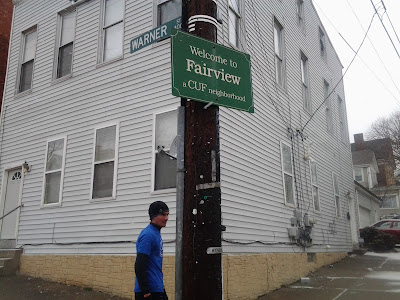 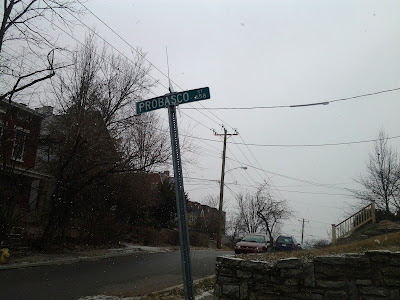 You all can picture what "Probasco" looks like on a street sign.  Probably not worth a photo.
After feeling some undeserved pride at our family names on the street signs, we turned into Bellevue Park.  The park structure is a FLW-inspired masterpiece by Carl Freund, who designed many of the Cincinnati park pavilions. I couldn’t help but hold my breath at the gorgeous building that made me think of a UFO landing in the snow. 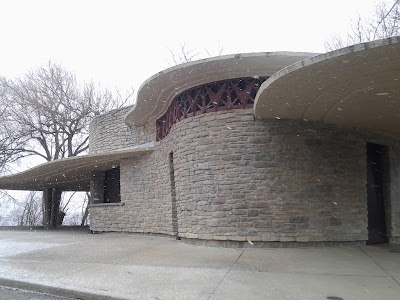 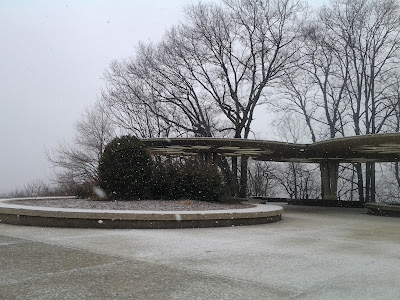 And then another overlook: 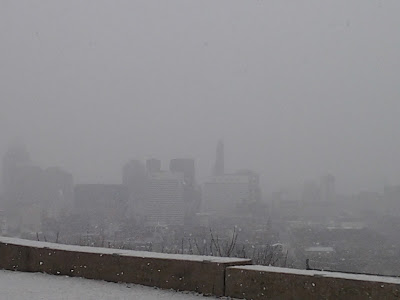 I could have stood here and read this sign for ten minutes, but our route planner had Wikipediaed it ahead of time and was ready to move on. 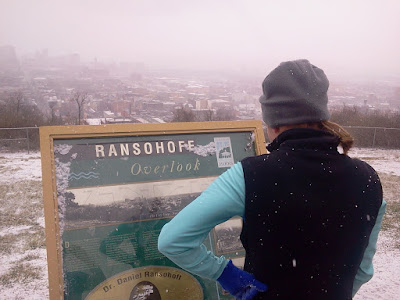 Closer to the UC campus we passed the recently-remodeled Hughes High School: 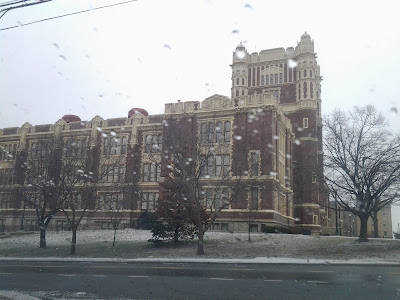 And then the source of the church bells that we had heard downhill: 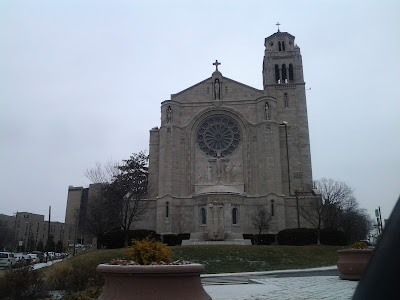 There is nothing like church bells in the snow, right?
Just before wrapping up we found this mural, which made me realize that I need very little in life to be happy: 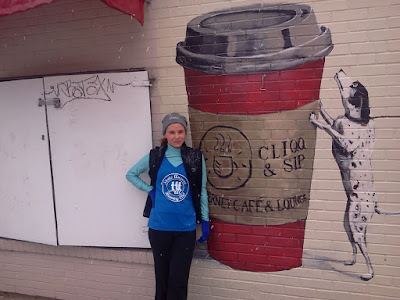 Coffee.  A dog.  Running.  Donnie.  Pizza.  Okay, that last one is sort of beside the point, but still, my joys are simple.
Today I discovered that CUF is unique and would be very livable—its parks and proximity to downtown are so appealing.  Most of it is in walking distance to the Clifton Avenue shops and restaurants. I could probably do without the hills, but every neighborhood has its small negotiations.


Today I also discovered that wearing a felt hat in wet weather will create a hank in my hair that takes twenty minutes of manhandling to remove: 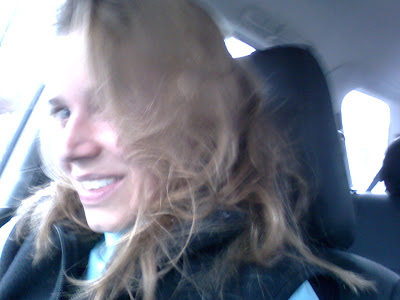 I'm laughing here because when I told Donnie I had a hank in my hair he asked what that was and I had to admit that I had no idea.

Cue a haircut.  And a dictionary.